Madrid; Everything One Could Possibly Need To Know

Air Travel In The Coronavirus Era

How does a city, and it's people, recover from having an atomic bomb dropped on it?

74 years later, I found out that Hiroshima, Japan perfected how to do exactly that.

A bustling downtown area with great restaurants and bars, friendly people, and a very moving peace park marking where the Atomic bomb was dropped and a memorial to all it's victims. What's not to love about this small Japanese city?

This powerful reminder of what happened at 8:15am on August 6th, 1945 is worth every minute you'll spend here. The Peace Park consists of several different areas worth visiting and spending time on.

There is no preset route to take and you can visit any site in any order you wish.

Here is what I recommend.

Walk towards Hiroshima Peace Park from the southeast, walking west, across the Nishi Heiwa-ohashi Bridge. Crossing the bridge, if you look to your right, you'll notice the Hiroshima Atomic Bomb Dome down the river just off in the distance. Continue on towards the first, large, main building. This building is the Hiroshima Peace Memorial Museum.

Looking at the glass door entrance of the Hiroshima Peace Memorial Museum, you'll notice a large and active fountain off to your left. Proceed to the fountain and spend a minute of two admiring what it represents. This fountain is a memorial to the victims of the atomic bomb that were seen and heard crying, "water!" after surviving the blast.

After the fountain, head inside the Hiroshima Peace Memorial Museum.

In the window you'll notice this clock. It counts the days since the atomic bomb exploded over Hiroshima. It also counts the days it has been since the world has last conducted a nuclear bomb test. If you look even closer you'll notice it has dark grey shaded clock hands memorializing the time 8:15am. This was the time the first atomic bomb ever used on mankind detonated over the city of Hiroshima on August 6th, 1945.

On the backside of the clock, there is a very powerful quote from His Holiness Pope John Paul II from when he spoke at the Peace Park in 1981.

For an extra ¥400 ($3.70) you can rent an audio tour in English. The audio tour has 64 stations along the designated path. Each station averages one minute in length. I'm really glad I did the audio rental. I learned A LOT from it.

*I want to make it abundantly clear that the images and the artifacts that are displayed in the Hiroshima Peace Memorial Museum are distressing and ARE NOT for the faint of heart. The museum does not hold back in showing what the city and its residents went through following the dropping of the atomic bomb. There is a similar warning before you enter the museum.*

If you don't do the audio tour, just follow the crowds into the predetermined route and read the signs that are displayed in Japanese, English and Korean. Stop and admire the artifacts recovered from the months following the blast.

After you finish the Hiroshima Peace Memorial Museum head out the doors and proceed to the centograph for the atom bomb victims in the middle of the Peace Park. When stepping up to it you'll notice the famous Atom Bomb Dome is perfectly centered in the middle of it off in the distance.

Continue on past the centograph and along the shallow reflecting pool. You'll come up on an eternal flame. This flame will burn until the last nuclear bomb is gone from the earth. The concrete display surrounding the flame is supposed to represent two open hands cupping the flame that represents a sign of peace.

Next you'll notice a small dome with a big bell hanging in the middle. Go ahead and go into the dome and ring the bell. Ringing it signifies a wish for peace.

Following ringing the bell, turn east (towards the Atomic Bomb Dome and the Motoyasu River) and head into the Hiroshima National Peace Memorial Hall for the Atomic Bomb Victims. This will require you going underground. Take a few moments to contemplate the 140,000 tiles that make up a mural of the damage of Hiroshima following the blast. Each tile represents each person who died on August 6th, 1945 through December of 1945 due to the blast and it's after effects.

Once back on ground level head north along the Motoyasu River. There you'll get spectacular views of the famous Atomic Bomb Dome across the river. Go ahead and spend a few moments admiring this historical building and taking as many pictures as you desire.

Continue just north and stop and admire the Children's Peace Monument. This monument is a memorial for the children that died on August 6th, 1945 and the months immediately following the blast.

Following the Children's Peace Monument, head west to the Atomic Bomb Memorial Mound. This mound contains the cremated remains of 10,000 people who were instantly cremated by the atomic bomb blast.

The temperature of the blast was 6,000 degrees Celsius, or 10,800 degrees Fahrenheit.

Your last stop in the Hiroshima Peace Park should be the Korean Monument which you can't miss if you turn around when at the Atomic Bomb Memorial Mound. This statute erected by Koreans who live in Japan is a memorial to the 20,000 Koreans who died in the blast. Many of them brought over to Japan due to it's occupation of the Korean peninsula from 1910-1945.

As far as I know the Korean Monument stops short of saying the 20,000 Koreans that died on August 6th, 1945 were slaves. Those Koreans were brought over to Japan looking for work having struggled to find work in Korea. That being said, during it's occupation of Korea, the Japanese did subject many Koreans to slavery and forced labor among many other crimes against humanity.

You'll notice this is a, "T" shaped bridge. This was the landmark the Americans used to aim the atomic bomb. The bomb called, "Little Boy" was supposed to hit the Aioi Bridge. It missed it's target and ended up exploding 600 meters above Shima Hospital, which is 240 meters east of the Aioi Bridge.

Walk along Aioi Bridge and turn right towards the Atomic Bomb Dome.

Your last stop of the day exploring the Hiroshima Peace Park should be the Atomic Bomb Dome. There are signs to read all around this famous memorial to the atomic bomb blast. There are plenty of places to take great photos of the remaining, memorialized structure. There may even be a guy who has booklets in several languages about the atomic bombing laid out on a curb near the main sign about the Atomic Bomb Dome. He is Japanese and speaks English.

I spent a pretty significant amount of time at the Peace Park and the Atomic Bomb Dome. I didn't rush anything. I recommend carving out a good chunk of your day for the Hiroshima Peace Park. This is not something you go this far to rush through. Nor would rushing through the Peace Park do it any justice.

This castle does not compare to Osaka Castle in Osaka, Japan, but it still worth checking out. There are a lot of colorful and large Carp in the waters surrounding the castle. It is also a 10 minute walk from the Atomic Bomb Dome.

Downtown Hiroshima is a bustling downtown area with plenty of shops, restaurants and bars. As seen below, it is beautifully lit up at night.

I didn't have the time to make it to this famous submerged shrine on nearby Miyajima Island even though it was suggested I go. The weather also didn't co-operate on the day in which I could have gone.

You can get there by taking the Hiroshima metro with one line transfer and a short ferry ride. It takes about 1:30 each way.

The other option is the boat that leaves from near the Atomic Bomb Dome.

How To Get Around:

CLICK HERE for my top tips on how to get around Japan.

There *used* to be a direct flight from Seoul to Hiroshima. However, as the two nations have escalated their retaliatory economic fight, the airlines that fly to Hiroshima cancelled their routes.

Instead I flew into nearby Osaka which is Japan's third most populated city. Osaka is just 1:30 away from Hiroshima by the Shinkansen bullet train.

Which means, if you find yourself in Osaka for a few days and want to embark on a day trip to Hiroshima, it is completely plausible to do so. As a matter of fact, I don't think there is enough to do in Hiroshima for a few days' stay so I highly encourage a day trip from Osaka.

Follow these instructions to get from Osaka to Hiroshima:

FIRST AND FOREMOST: Purchase a JR-West Rail Pass. There are several versions of this spanning different amounts of days. The more days, the more expensive it is.

With the JR-West Rail Pass you get unlimited access to any Shinkansen train free of extra charge. So, in that five day period, if I wanted to take several Shinkansen trips between Hiroshima and Osaka, I can do that without paying extra.

Please be aware that the "Kansai-Hiroshima Area Pass" DOES NOT guarantee you a seat on the train. Each time you ride you may pay an extra fee for a, guaranteed, reserved seat.

A non-reserved seat gets you a seat in cars 1-3 (the front). If you don't pay the extra for a reserved seat, make sure you que up early.

I did not pay for a reserved seat. I had no issues finding a seat. Granted, I was a solo traveler and I was getting on and off at major destinations. I noticed many got off at Shin-Osaka and Hiroshima so the non-reserved cars cleared out, allowing me to grab a seat.

If you're getting on and off at lesser trafficked destinations you might have more trouble finding a non-reserved seat.

The other option is the Kansai Airport Rapid Service train which makes several stops along the same route. This train will take 1:05 to get from Kansai International to Shin-Osaka.

It's very important you get on the Haruka train. 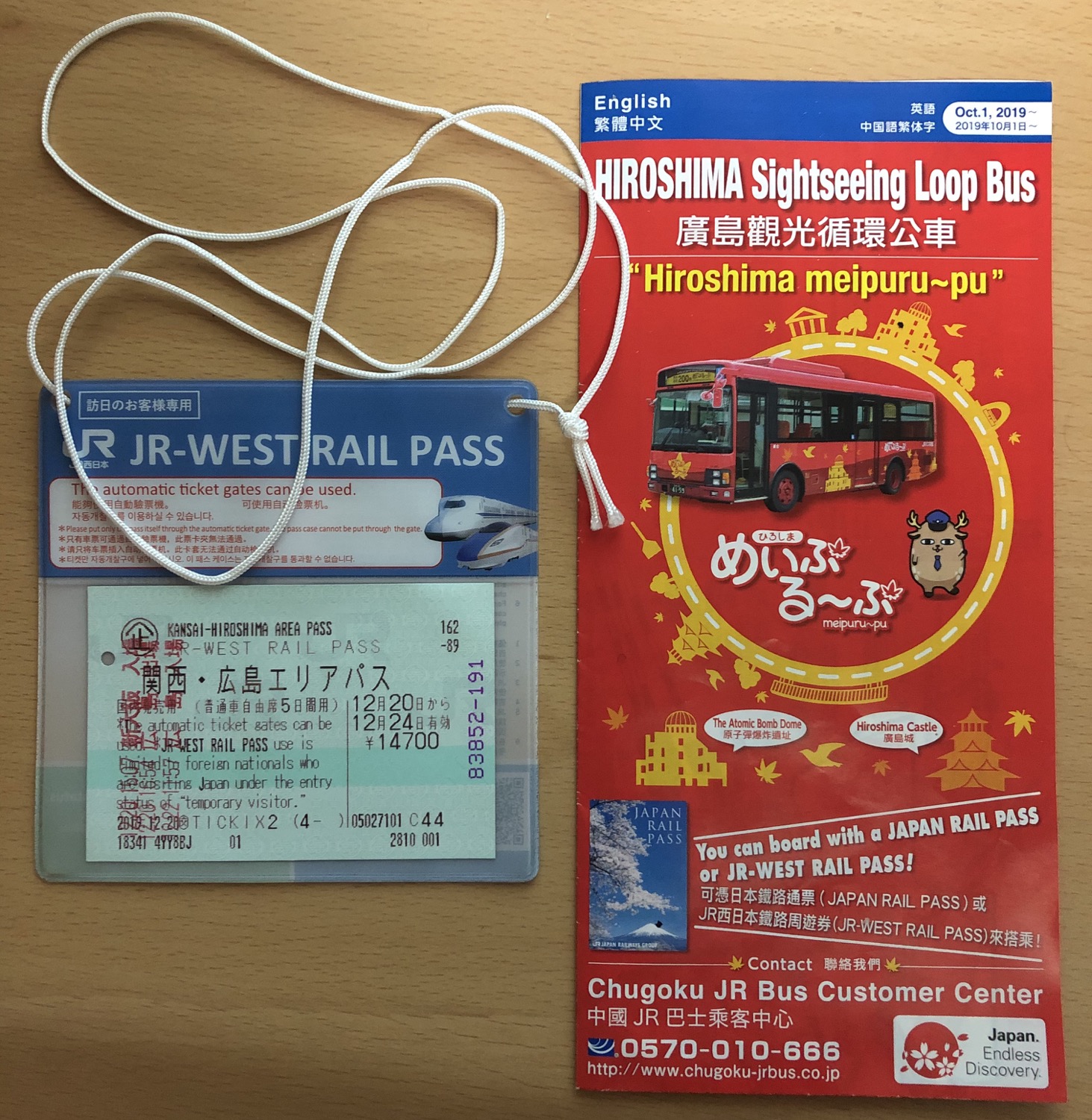 It is also important you get on the Nozomi Super Express Shinkansen. This train makes less stops between Osaka and Hiroshima. It takes just 1:30 to go from Osaka to Hiroshima. The other Shinkansen, the Sakura, makes significantly more stops that will add to your transit time.

With your purchase of the JR-West Rail Pass, you get free access to the Hiroshima Sightseeing Loop Bus. This bus does a very convenient loop around the city. This includes stops at Hiroshima Station (Shinkansen), the Atomic Bomb Dome, and Hiroshima Peace Park. This makes it easier to not have to bother with the normal public transportation which can be more confusing and will be an extra charge.

Hopefully you noticed how this article was written in black and blue. I wrote about anything that had to do with the Atomic Bomb in black because it represents grief. I wrote everything else in blue because blue represents peace. I'm writing this in orange because orange represents importance.